"We should resist the temptation to find some problem that can be studied on a convenient scale, but rather should strive to identify the important problems then ask what is the proper scale on which to study them and how such studies might be carried out if the scale is large." -R. May 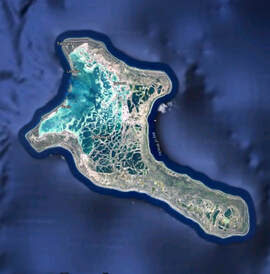 Study Location: Kiritimati
Coral reefs, the most diverse marine ecosystems, are under extraordinary pressure from global climate change, fishing, and pollution. Our coral reef field research centres on Kiritimati (pronounced ‘Christmas’), in the central equatorial Pacific Ocean. The world's largest atoll, Kiritimati has a strong gradient of local disturbances, from its heavily impacted northwest coast where the population is concentrated to the remote uninhabited end of the atoll, which has some of the world’s healthiest reefs (Watson et al. 2016 Ocean & Coastal Management). Kiritimati also experienced globally unprecedented heat stress during the 2015-2016 El Niño, and suffered mass coral mortality as a result. The atoll is thus an ideal location to study how global climate change and local human disturbances interact to change coral reefs, and to test the resilience of these ecosystems. ​In our current research on Kiritimati we aim to discover how climate change and fishing impact coral reefs, and what mechanisms will enable reefs to resist and recover from these stressors. 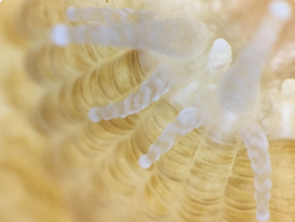 Coral Symbiosis and Global Change
​Reef-building corals obtain most of the energy they need to survive from single-celled, photosynthetic algal symbionts, Symbiodiniaceae, that live inside them. This symbiosis is very sensitive to stress and breaks down under conditions such as warm temperatures (a phenomenon known as ‘bleaching’). Susceptibility to bleaching varies between corals, and is significantly shaped by their associated microbes (especially the type of Symbiodiniaceae they host, but also their communities of bacteria, fungi and viruses). We use molecular techniques to ask ecological questions about these symbiont communities. We examine how interactions between local human impacts and global climate change shape coral symbiont (Claar et al. 2020 Scientific Reports, Claar et al. 2020 Molecular Ecology) and microbiome communities (McDevitt-Irwin et al. 2017 Frontiers Mar Sci, McDevitt-Irwin et al. 2019 Coral Reefs), and how these communities affect bleaching and survival (Claar et al. 2020 Nature Communications). This work has been based on the island of Kiritimati in the central Pacific and in upcoming years we will be expanding these projects to other tropical Pacific reefs.
​​
Current Team: Sam Starko and Daisy Buzzoni 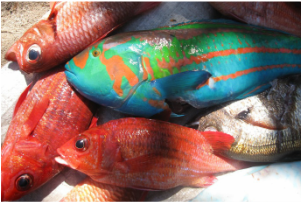 Coral Reef Resilience and Global Change
We study many components of the coral reef ecosystem, from the corals and their associated Symbiodinium and microbial communities, to the overall benthic community structure and complexity, and the reef fishes and urchins. Our research includes a coupled ecological-socioeconomic monitoring program that has run since 2007. We have previously used both size and species-based to understand how coral reef community structure change with increased local human disturbances (Dunic et al. 2017 J. Animal Ecology, Robinson & Baum 2016 Can. J. Fish. Aquat Sci.,  Wood et al. 2015 Ecology). We have also published a global meta-analysis of the impacts of El Niño events on coral reefs (Claar et al. 2018 PLoS ONE) and contributed to a collaborative publication showing that the return time between severe heat stress events is now insufficient for coral reef communities to recover (Hughes et al. 2018 Science). In the past few years we have published some of our findings following the 2015-2016 El Niño event including its impacts on habitat complexity (Magel et al. 2019 Scientific Reports), fish communities (Magel et al. 2020 Ecological Applications), coral resilience (Claar et al. 2020 Nature Communications) and their microbes (McDevitt-Irwin et al. 2019 Coral Reefs). We have more papers coming that will be looking further past the event and the start of recovery on the reefs so stay tuned!

Marine Macroecology in a Changing World 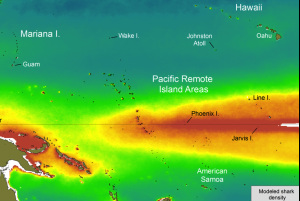 Macroecology, the broad spatial-scale study of relationships between organisms and their environment, has provided novel insight into species' abundance, distribution and diversity patterns, and their underlying mechanisms. These fundamental ecological properties are, however, increasingly influenced by human disturbances. Our macroecological research thus seeks to elucidate how anthropogenic disturbances, known broadly as global change, are changing the size structure and diversity of marine communities, and the influence of these disturbances relative to abiotic and biotic natural influences.
Our current focus is coral reefs of the Pacific Ocean: this region includes most of the world's remaining intact coral reefs, and its many islands and atolls span multiple disturbance gradients embedded within regional gradients of biodiversity, oceanographic productivity, and temperature.  We examine large observational datasets from this region, treating whole coral reefs as experimental units in an ocean-scale ‘natural factorial experiment’. In collaboration with scientists at NOAA's Coral Reef Ecosystem Division, we have shown that the 'human signal' now swamps the abiotic influences on reef fish abundance: remote coral reefs harbour ~four time more fish biomass than do reefs near humans (Williams et al. 2011 J. Mar. Biology; Williams et al. 2015 PLoS ONE); this effect is exacerbated for reef sharks, whose numbers are typically 90-97% lower near human populations (Nadon et al. 2012 Conservation Biology). More recently, we've examined how functional diversity of coral reef fish communities varies across the Pacific Ocean (Yeager et al. 2017 Global Ecology and Biogeography) and used size-based approaches to illustrate how fishing alters coral reef communities (Robinson & Baum 2016 Can. J. Fish. Aquat. Sci.; Robinson et al. 2017 Global Change Biology). We are also keen to ensure that robust macroecological methods are being employed, and to this end, we have recently tested both functional diversity metrics (McPherson et al. 2018 Methods in Ecology and Evolution) and size-spectra models (Edwards et al. 2017 Methods in Ecology and Evolution). In the spirit of open science, we have developed a new open-source spatial data product - Marine Socio-Environmental Covariates (MSEC) - which consists of high-resolution, global data layers of environmental and anthropogenic impact variables, for use in marine macroecological data analyses (Yeager et al. 2017 Ecology)

Where the Wild Things Were: Quantifying Changes in Reef Sharks 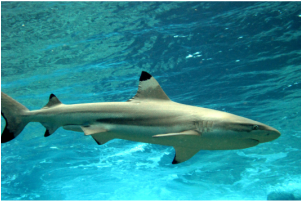 Building on my earlier work on sharks (see below), for the past seven years, we have focused on quantifying changes in the abundance of Pacific reef sharks, an area where remote islands have until recently provided de facto protection for these predators. In collaboration with Marc Nadon at NOAA's Coral Reef Ecosystem Division, we have shown that the 'human signal' is now the primary determinant of abundance of grey, whitetip and other reef sharks in the Pacific Ocean, overwhelming the influence of oceanographic productivity and temperature (Nadon et al. 2012 Conservation Biology). We estimate these species have declined to about 3-10% of their baseline levels on U.S. Pacific coral reefs. Using a long-term citizen science data set, we have also estimated trends in abundance for eastern Pacific sharks and rays at Cocos Island, which suggest that this UNESCO heritage site and MPA is not effectively protected (White et al. 2015 Conservation Biology; Baum & White 2015). We recently published a review of the ecology and conservation status of reef sharks (Osgood & Baum 2015 J. Fish Biology) and are currently working on testing methods for estimating shark trends.
Team: Geoff Osgood

Cascading Effects of Predator Losses in the Ocean 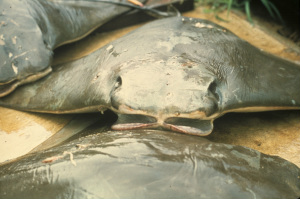 Decades of research have shown that changes in predator abundance can have far-reaching  ecosystem consequences. Yet in the ocean, where cascading effects of predator depletions, recoveries, and invasions could be significant, such effects remain poorly understood.
Coupling time series analysis, meta-analysis, and experimental manipulations, we examined the community-level consequences of shark depletions in U.S. coastal waters, and showed that as abundances of all 11 great sharks that consume other elasmobranchs (rays, skates, and small sharks) fell over the past 35 years, 12 of 14 of these mesopredatory prey species increased (Myers et al. 2007 Science). A trophic cascade also emerged as these effects cascaded down from one of these mesopredators, cownose ray, to its bay scallop prey, terminating a century-long scallop fishery.
Synthesizing the emerging body of evidence for oceanic top-down control revealed that while predator depletions often lead to mesopredator release, trophic cascades seem limited to instances when oceanic predators link to nearshore food webs, and are inconsistent in the pelagic realm where effects often attenuate at plankton (Baum & Worm 2009 J. Animal Ecology). Predator diversity can dampen cascading effects except where non-selective fisheries deplete entire predator functional groups. Continued research is needed to understand the relative strength of top-down and bottom-up control, and interactions with intensifying stressors such as climate change.

Where the Wild Things Were: Quantifying Changes in the Oceans' Apex Predators 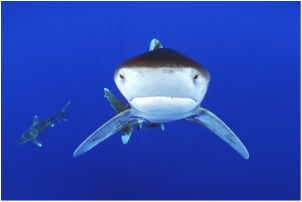 Sharks are iconic oceanic predators, but many species are highly vulnerable to overfishing. Exploitation of these predators - both as bycatch and as direct targets for their meat and fins - has increased substantially globally in the past three decades. Yet few long-term data sets exist for these species.
Our research provided the first demonstration of regional scale declines in apex predatory sharks (Baum et al. 2003).  Since then, we have examined early scientific expeditions to compare shark abundances between the 1950s and late-1990s (Baum & Myers 2004), and fisheries observer data and research surveys to estimate shark trends in abundance over the past three decades (Myers, Baum et al. 2007; Baum & Blanchard 2010). The overall pattern is one of precipitous declines. We also have contributed to assessments of the global status of a suite of apex predatory sharks as part of the IUCN’s Shark Specialist Group (Dulvy, Baum et al. 2008) 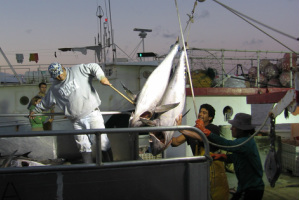 Concern about the impacts of fisheries on marine populations and ecosystems has been on the rise. Scientific opinion about the extent of overfishing is, however, polarized with fisheries scientists contesting the severity of some reported declines. Scientific debate is healthy, but most criticisms have done little to illuminate the overall state of fisheries since they typically draw upon only a limited number of case studies. Reconciling these divergent views requires comprehensive data and rigorous empirical analyses.
To meet this challenge, we co-developed the RAM Legacy Stock Assessment Database along with Daniel Ricard (Dalhousie University), Olaf Jensen (Rutgers University), Coilin Minto (Galway-Mayo Institute for Technology, Ireland), and colleagues at the University of Washington and fisheries institutes around the world (Ricard et al. 2012). This new global fish population dynamics and fisheries database is named in honour of our mentor and friend, the late Ransom A. Myers. Version 1.0 of the database was released publicly in October 2011, and includes recent abundance and fisheries time series data for over 350 marine fish and invertebrate populations from around the world. Our goal for the database is to provide a resource for the broader scientific community, with which questions pertaining to fish population dynamics, predator-prey interactions, and the state of fisheries can be examined through rigorous comparative analyses.
To date, the RAM Legacy SADB already has formed the basis of several Nature and Science papers, including our examination of the global state of marine fisheries (Worm et al. 2009), which was awarded ESA's 2011 Sustainability Science Award. Using these data, we have examined trends in abundance in marine fishes in relation to the 2010 CBD target of reducing the rate of biodiversity loss (Hutchings et al. 2010), tested if the Marine Stewardship Council's (MSC) certification reliably indicates 'healthy' populations (Gutiérrez et al. 2012), compared IUCN Red List assessments with fisheries assessments to ascertain where the real discrepancies lie between these two approaches (Davies & Baum 2012), and illustrated the importance of historical data for setting accurate baselines for marine animals and ecosystems (McClenachan et al. 2012). We also have demonstrated that recovery of overexploited marine fishes can occur quickly, but the process becomes highly uncertain the longer reductions in fisheries mortality are delayed (Neubauer et al. 2013).